Is last week’s panic over? The altcoins are stabilizing, this happened after Bitcoin hit a new all-time high price of $5846 in Bitstamp. A sharp increase since our last market update.

The altcoins market is getting balanced, after the influx of money from altcoins to Bitcoin following the expected fork that is expected on the 25th this month (Bitcoin Gold). Some of the altcoins have found their floor, but all of this can change if Bitcoin’s price continues to rise. So far, the altcoins market has been very much affected by the rise of Bitcoin’s price, but still, some of the coins maintain their value against the USD while depreciating against Bitcoin. The heavy money is still invested in the crypto market, but the dominance of Bitcoin in the market has strengthened. Currently, the market dominance stands at 54.9% dominance in Bitcoin’s favor. Bitcoin, the biggest child of the cryptocurrencies, shows that the power and most major influence in the market come from it. The market cap of all of the crypto coins together is valued at $170 billion. These are the high areas of the total market cap where we have seen at the beginning of September 2017, but the situation is now different in terms of dominance, in favor of Bitcoin as mentioned. In total, the market is still pointing upwards with corrections that grow and deepen as the prices arise.

More news: Russia is issuing a new cryptocurrency that will use blockchain technology, called the “CryptoRuble”. Wall Street believes the price of Bitcoin will reach $6,000, according to Bloomberg. On October 18th, China’s National Congress of the Communist Party begins, which may affect the future of crypto regulation. In recent days, users of the leading exchange, Bittrex, have been complaining about blocking their account and requesting KYC authentication by Bittrex.

We are currently at the all times high price, but it will take time for most of the world to fully appreciate the technology behind cryptocurrencies.

In the near future there will be many events around the crypto world. Another prominent event, in the near future, is the fork of Bitcoin Gold. Unlike the previous fork we had in August 2017 (Bitcoin Cash), on the new chain that will be created after the fork, mining will be different from mining the usual Bitcoin as we know – doing this will only be possible by using graphic cards (GPUs), rather than by using ASICs. This will cause the original Bitcoin network not to be affected or lose a portion of its mining hash power. In fact, the team behind Bitcoin Gold believes that it will be possible to bring back the decentralization to Bitcoin by using this mining method. The reason for this, is that today, the company that controls 70% of the mining power, Bitmain, does so by using ASICs – dedicated machines with custom circuits specially built for Bitcoin mining.

Our recommendation for the upcoming fork is to hold your Bitcoin in a cold storage wallet where you have full control over the private key. Some wallets that support:

Additional explanations for the fork to Bitcoin Gold can be found here.

Resistance level is around the price range of $ 5700 – 5800. At the moment, it seems that the volatility level has increased and reached to changes of up to $300. The price currently bounces in these ranges, around $5600, with a large space for a correction down to $4800, the point from which the price quickly pumped up to the areas we are now at.

We are now very close to the point where the price reaches the level of $6000. This is considered very rapid increase, a correction is expected to take place in same scale and strength to the opposite side. As quicker the price will go up, the stronger will be the correction downwards, this we conclude by watching the historic chart. The fork affects the price, as we saw this after the successful fork of Bitcoin Cash in early August 2017.

The price of Ethereum actually touched the floor areas of the Fibonacci correction levels, which were marked by us on our previous market updates, and can also be seen in the graph below. A very fragile and unstable situation in trading against Bitcoin on the daily graph. The RSI indicator is quite low, does the market believe this is the floor? Strong resistance level at the price range of 0.06BTC. 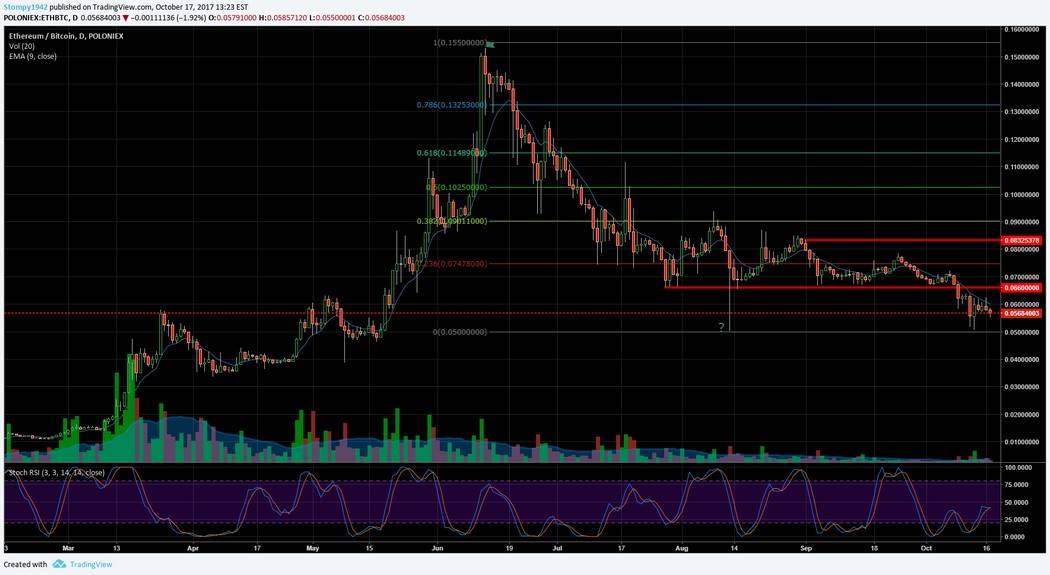 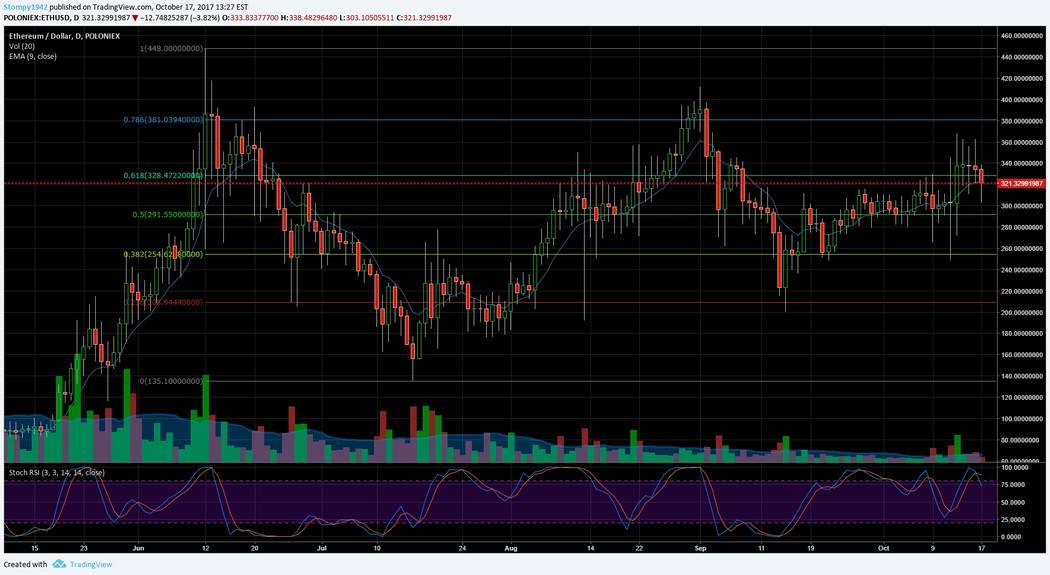 Following our previous update, the price completed another decline. Today, we had huge volume in BCH trading which went up from support levels at 0.055BTC and ended in a sharp rise of 25%, which has led the price to above 0.07BTC. At the moment, after the correction, the coin is trading at 0.062BTC, probably due to this article that was posted on Bitcoin.com claiming that Bitcoin Cash is the real Bitcoin. 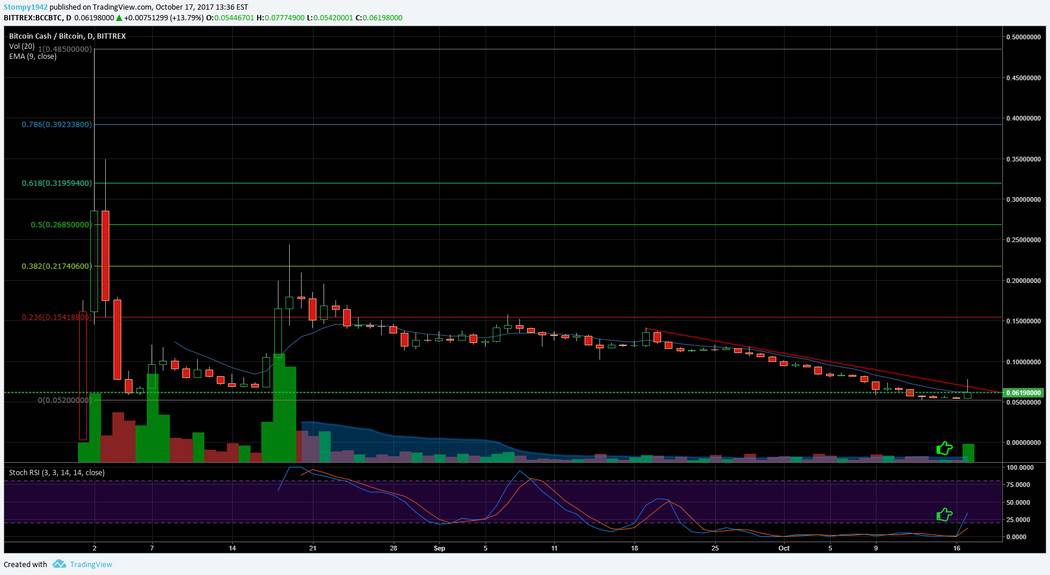 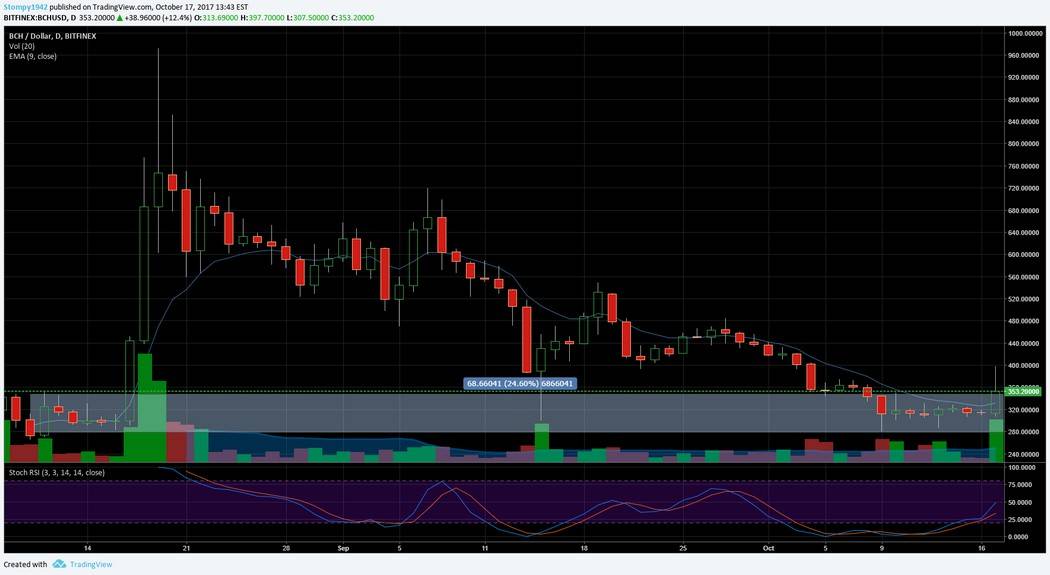 The support level lies around 0.005BTC, the young altcoin had passed a long way since it came out for trading following the announcements that emerged from China. As expected, NEO, known as the Chinese Ethereum, is currently traded around the price of 0.0056BTC and appears to be having an interesting W-shaped pattern on the daily chart. 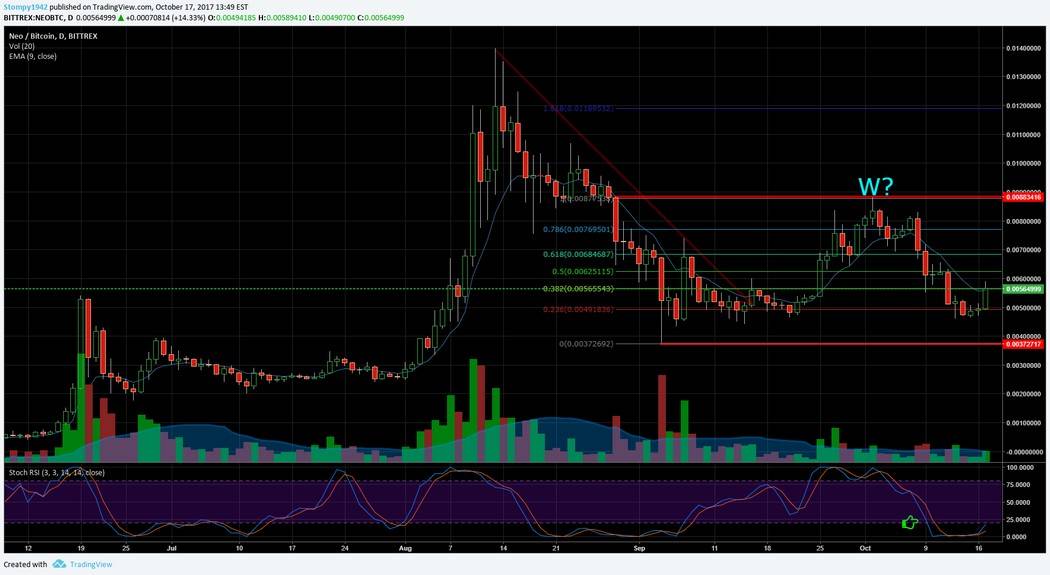 Against the dollar, NEO is on continues rise and reached $31, after having a lot of support around the price of $28. The graph is somewhat similar in its behavior to the graph of Ethereum against the dollar. 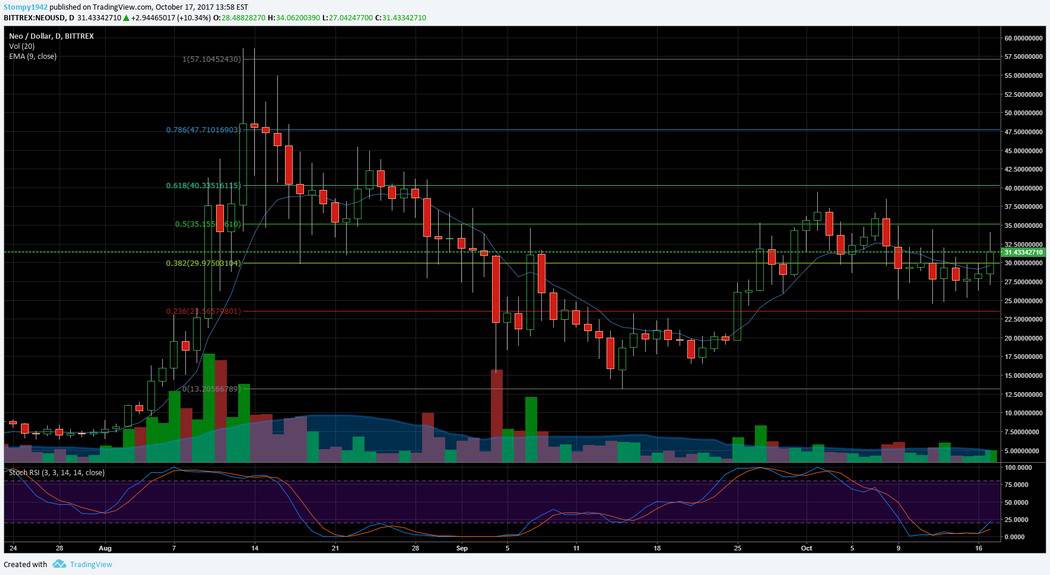 Bitcoin Regulation is Simple in Theory, Incredibly Complex in Reality